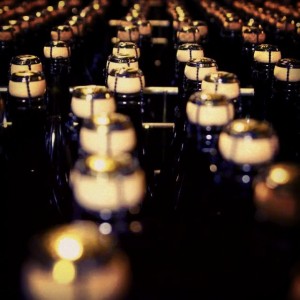 (Carducci, taken from the correspondence with the Countess Lovatelli) 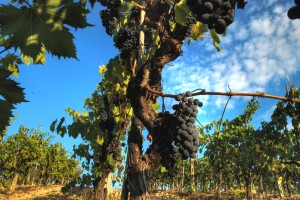 The term Lambrusco indicates a number of different grape varieties and wine produced with these.

Lambrusco grapes are red, mostly grown in Emilia-Romagna in the provinces of Modena and Reggio Emilia and Lombardy in the province of Mantova. Are used to produce one of the few red or rosé sparkling wines.

The etymology of the name is uncertain, there are two main hypotheses about this: the first is that the name derives from “labrum” (the edge of the field) and “ruscum” (wild plant), vine “la brusca” would be the one that grows uncultivated the edge of the fields; the second thoery attributes the origin of the merger terms “labo” (take) and “ruscus” (that stings the palate), hence the origin of the word “brusco”. This word in fact, is identification of the characteristic of young wines, connected to a moderate acidity and tannins lively and pleasant.

The evidence concerning the existence of Lambrusco revolve around the origin of the same name. The significance of wild plant, can be traced after the discovery of vine seeds dild (wild) in its current production area of Lambrusco. Testimonies come to us from the Latin and precisely by Virgil, native of Mantua, other precious area of actual production, which speaks of the existence of the “vitis labrusca” two thousand years ago, in his fifth Bucolic. Even other writings of the time talking about the kind of vine, as the “De Agri Cultura” of Cato and the “Naturalis Historia” in which Pliny the Elder says: “vitis vinifera the whose leaves, like those of the vine labrusca, become colored blood before falling”. It’s not certain that the origins of the cultivation of this vine, in a treatise on agriculture of the 1305 Pietro de’ Crescenzi, suggests to consider the growing of vine labrusca.

In 1567 Andrea Bacci, Pope Sixtus V’s doctor and botanical stated that “on the hills opposite the city of Modena are grown “lambrusche”, red grapes, which give spicy, fragrant, frothy wines for bubbles gold, when are pouring in the glasses.”

In about 1700, there was an important technical innovation for the conservation of this sparkling wine: the introduction of a particular bottle called Borgognona, characterized by a thick and resistant glass and its cork held stationary with the aid of a twine that otherwise would tend to jump because of sugars fermentation, which creates carbon dioxide.

In 1867 Francis Aggazzotti, precious descriptor also of balsamic vinegar, offers a first exhaustive breakdown of the three main kinds of cultivated varieties: Lambrusco Sorbara or Viola, Lambrusco Salamino and Lambrusco Graspi Rossi, from which will derive all the various kinds of Lambrusco.

In the first half of the twentieth century Lambrusco was a decidedly dry wine and its foam, just like Champagne, was produced by a second fermentation in the bottle. With the advent of new technologies, the production of Lambrusco wine increased considerabile since the early ’60s, with the introduction of the Charmat Method. So in the next two decades Lambrusco was sold considerably abroad especially in the United States where it was very successful reaching nearly 50% of imported Italian wines in America. In that place, in fact, was promoted as a kind of Italian Coca Cola. But in the ‘90s the production of Lambrusco took a turn from the qualitative point against the quantitative one. There was a return to the origins of Lambrusco, drier and more consistent and less sweet. 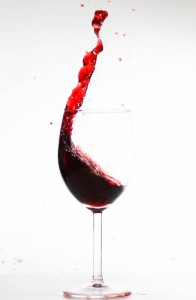 Lambrusco is a wine that goes well with the products of the Emilian cuisine, sometimes characterized by products high in fat and flavoring. It also goes well with robust foods such as pork, sausages and lamb; it’s great to taste with local cheeses: Parmigiano Reggiano and Grana Padano.

Lately Lambrusco is also used in the production of special cocktails like the “Spuma Lambaroni” winner of “Barman Day Award 2010” held at the Lingotto in Turin in the review of the manifestation of Slow Food.