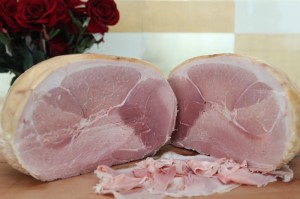 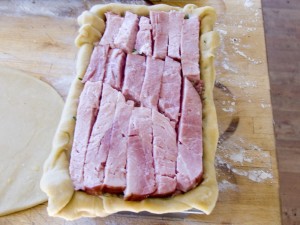 Typical Italian cold cut made from salting and cooking a leg of pork, boneless, subjected to salting and then cooked. The name defines only cured meat derived from anatomical cut reference, called it exactly “ham“. Another cold cut, instead proceeds from the shoulder of pork, less valuable but similar nutritional level, is called cooked shoulder.

It is not a bagged cold cut and it’s partially covered with rind. The Ministry of Industry, with the Decree of 21 September 2005 (OJ No. 231 of 4 October 2005) diversifies the ham into three distinct types: high quality ham, ham chosen, ham.

These designations govern the production and sale of ham on the Italian territory. 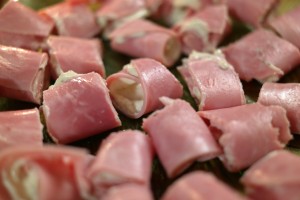 The hams are deboned and salted with a brine containing flavorings and preservatives. This is followed by churning, pressing in molds and steam cooking. There are also variants roast.

The color is light pink, with thin edging of fat that contributes to its mild flavor but typical.