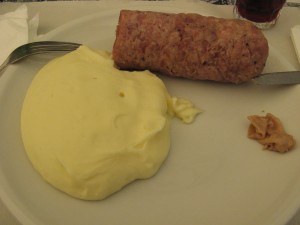 Typical cold cut of Modena, P.G.I. protection, consisting of a mixture of lean meat, fat and rind of pork, with the addition of salt, pepper and other spices, and sometimes wine, depending on the recipe; the mixture of Cotechino is contained in a natural or artificial intestine casing.

The preparation of the Cotechino Modena begins with grinding in a mincer with molds characterized by holes ranging in size from 7 to 10 mm for the surroundings of muscle and fat, and between 3 and 5 mm for the rind. Follows eventual roughing and kneading in a vacuum machine or at atmospheric pressure. The resulting mixture is stuffed into natural or artificial casings, unlike Zampone, which is contained in the front leg of the pig. The fresh product undergoes a further process of drying in hot air oven while the precooked, is boiled in water and packaged in airtight containers, suitable for the subsequent heat treatment in an autoclave at a minimum temperature of 115 ° C, for a time sufficient to ensure product stability in trading conditions recommended. The sausage must be easily be sliced and hold the slice, which must appear compact, with uniform grain size and pinkish reddish uneven.

The history of Cotechino dates back to ancient times: the legend tells that the sausage was created at the beginning of the sixteenth century by the citizens of the court of Pico Mirandola to better preserve the meat of pigs, during the long siege of the city by the troops of Pope Julius II della Rovere. The product began to spread towards the end of ‘700, when he arrived to replace the sausage yellow, which had already made famous Modena in the Renaissance. Its spread in the neighboring regions came with the transformation into semi-industrial structures of the first two famous butcher shops, Frigieri and Bellentani. Already in 1800 the product was very popular and appreciated. 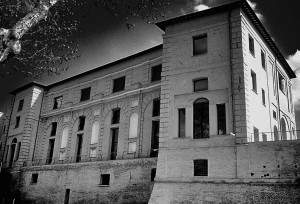 Cotechino Modena is sold both as a fresh product, but also as a cooked product. In the first case can be brought to the table only after prolonged cooking. Cold cut is sliced and served very hot, in combination with boiled (accompanied by the traditional green sauce) and with side dishes such as mashed potatoes or cooked vegetables (spinach, lentils, cabbage, beans).