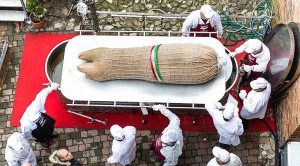 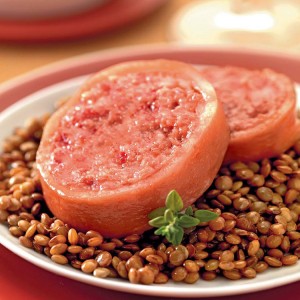 Zampone of Modena is a cold cut of protected geographical indication (P.G.I.) made with pork rind and meat chopped, salted and spiced wrapped into the package formed by the front leg of the pig, which takes the form. Its work starts from a mixture of pork (cheek, head, throat, shoulder), with the addition of salts, herbs and spices. The grinding of the meat takes place in grinders molds with holes of different diameter: 7-10 mm for the portions of muscle and fat, 3-5 mm for the rind. All the ingredients are mixed in a vacuum machine or at atmospheric pressure and bagged into the natural casing of the skin of the front leg of the pig, clean, tanned, defatted, complete of distal phalanges, and tied at the top end.

At one time it was mainly marketed raw trotter. The need of a long cooking and the needs of convenience have led manufacturers to offer a baked product, which also has storage times longer thanks to a hermetic packaging vacuum that guarantees the maintenance of the organoleptic characteristics. The fresh product is subjected to drying in hot air oven; what is cooked packaged in sealed containers and subjected to heat treatment in an autoclave at a minimum temperature of 115 degrees centigrade. Zampone should be easily sliced and slice must appear compact with uniform particle size, pinkish, reddish, uneven.
According to tradition, the trotter was created at the beginning of the sixteenth century by the citizens of the court of Pico Mirandola to better preserve the meat of pigs, during the long siege of the city by the troops of Pope Julius II. According to legend, all the pigs were slaughtered to prevent them falling into the hands of the invaders and their meat, ground and bagged in the paws of the pigs, gave birth to a highly original typical product which had great success in the coming centuries. Neighboring areas in fact the product began to spread in the late ‘700, in step with the development of pig farming industry and charcuterie. 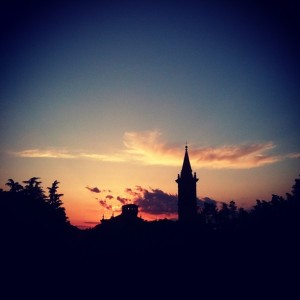 It ‘a particularly tasty, often found on the tables of Italian families during the Christmas days. The taste is dense, strong, very aromatic. It has a firm texture and uniform and a bright pink to reddish. The trotter, cooked and sliced, combines traditionally with lentils, but also with stewed beans, mashed potatoes or spinach with butter and Parmigiano Reggiano. The high fat content in the product, particularly in the craft, determines a high calorie, about 319 calories for a pound of pig’s feet. Regarding the recommended wines, the ideal pairing is with sparkling red, particularly Lambrusco.

The production area of  Zampone includes, in addition to Mantua, Cremona and some other areas of Northern Italy.
Since 1991, the town of Castelnuovo Rangone in the province of Modena holds the world record, registered in the Guinness Book of Records, trotter world’s largest: in 2000 reached a weight of 450 kg in 2006 to 751 kg. Dates back to 2008, the last record with a zampone weighing 942 kg.