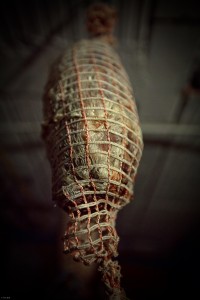 Cold cut obtained by processing the abdomen and the lower part of the pig. The parts of the belly pigs are squared and trimmed. Trimmings are used for the fat part of salami (lardons) and for Ciccioli.

After the trimming, bellies pass at the salting. In addition to salt, are added herbs and spices (frequently black pepper, rarely other flavorings such as cloves and nutmeg).

After, Pancetta is massaged to penetrate salt and spices in the meat. The rectangular piece is then tightly rolled, tied with string robust: the result is a cylinder rounded at the ends with string to hang it in the dryer for 10-15 days. Now begins the seasoning, the duration of which varies from 90 to 120 days: a longer aging gives a better quality to Pancetta. 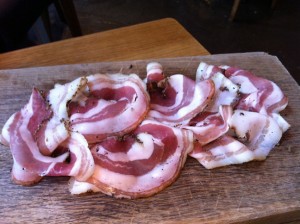 The outward appearance of the final cut will be a layer of white fat with threads pink (more or less dark) of lean meat.

The taste of the bacon is very special: the large percentage of fat gives it a smell and taste sweet and slightly spicy very pleasant. It can be eaten alone or with a few slices of ripe pear or served with fava beans and pecorino.