Term commonly used to refer generically some condiments and sour vinegars produced in the provinces of Modena and Reggio Emilia.

Historically within what are now called the “ancient Este dominions” there was operations on vinegars produced in homes to make them more attractive, by aromatization with drugs (licorice, rosemary, rose, vanilla) or producing them with different raw materials (Trebbiano, Muscat) or procedures, creating over the centuries a widespread reputation for “the vinegars of Modena”. 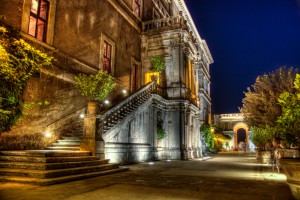 In the records of the cellars of the Palazzo Ducale in Modena, located in Rubiera, appears for the first time in 1747 the adjective “balsamico”, to distinguish a particular type than the others in the rich set of the building. In 1830 this definition was further enriched, so vinegars at court were divided into “balsamici”, “semibalsamici”, “fines” and “commons”.

With the birth of the Italian State (1861), the awakening of the markets has gradually attracted more interest in Balsamic, also developing considerable historical and bibliographic researches around this product, which, coming out shyly from the privacy of the family vinegar storages, was receiving some success.  At the end of the XIX century Modena balsamic vinegar begins to appear in the most important exhibitions, creating great interest not only in the area but also internationally.

From the regulatory point of view the first ministerial authorization to produce the ”Aceto Balsamico del Modenese” dates back to 1933. After World War II the economic boom and the expansion of consumption led some manufacturers (the most important of which were perhaps Telesforo Fini and Monari-Federzoni family) to market under the name “Aceto Balsamico” a product different from that traditionally prepared in attics private, founding the name by historically use present to cuts with wine vinegar for normal daily use. Balsamic vinegar then became a common product on tables all over Italy, starting to make his way in many foreign countries. Additional regulations providing for the use of the term “balsamic vinegar” followed in 1965 (Presidential Decree 162/1965) and drafting of the first rules of production of “Aceto Balsamico di Modena” (Ministerial Decree of 12 December 1965). In 1976, because of the substantial identification of the term “balsamic” vinegar with the industrial type, was adopted the definition of Balsamic vinegar “natural”, to indicate and distinguish the product as defined in the “Consorteria dell’Aceto Balsamico Tradizioanale” of Spilamberto. A few years later, because of legislative needs, term “natural” was replaced with “Tradizionale“. 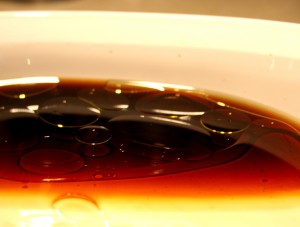 The growing prevalence of “balsamic products”, not only in Italy, have led to a wide use in the kitchen and the publication of numerous recipes. Usually the most used are the Balsamic Vinegar of Modena P.G.I. and condiments, especially for reasons related to the cost of the product. The traditional balsamic is generally used in more sophisticated preparations, where the preferred acidity is more complex and less harsh than that typical of the presence of wine vinegar. Balsamic vinegar is a condiment that is suitable for many preparations. Goes well with each course from appetizer to dessert.