P.D.O. cold cut typical of the Lands of Matilda that extend between the Via Emilia and the bed of the river Enza, is famous throughout the world and is characterized by its distinctive nutritional well even for the “crown”, the brand that is seared only on the originai. It has a traditional method of processing that has its roots in ancient times, and then preserva. 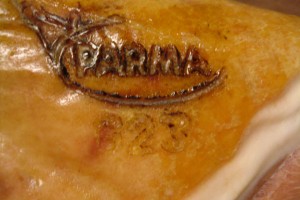 The typical production area of Prosciutto di Parma, that is the area allowed for the entire ham processing, is indicated in the specification, as well as by the law 13/07/1990 n.26, and before that by the law 4/7 / 506 of 1970, is that area of the province of Parma to the south of the Via Emilia, at least 5 km from it, under 900 meters above sea level, and bounded on the east by the Enza river and to the west by the river Stirone. Big production however is concentrated around the town of Langhirano, whose economy revolves around the induced of the cold cut.
The pigs instead may come from Italian farms located in these regions: Piedmont, Lombardy, Veneto, Emilia-Romagna, Tuscany, Umbria, Marche, Lazio, Abruzzo, Molise.

The centuries-old tradition of cold cut is ordered as a separate asset, only at the end of the Middle Ages, from the Art of Lardaroli, originated by specialization from stronger Art of Butchers.
But the fame of Parma Ham, exclusive specialty of Lardaroli Parmensi, rooted in even farther, to the Roman era. Parma, then located in the heart of what was the Cisalpine Gaul, was renowned for the activities of its inhabitants who raised large herds of pigs and were particularly skilled in producing salted hams. Following the course of the centuries, about the ham and the preparation technique spoke Polybius, Strabo, Horace, Plautus and Juvenal. John B. Dancer writes that when Hannibal in 217 BC entered in Parma and was greeted as a liberator, the inhabitants offered him to celebrate the hams salt cured in wooden barrels that he appreciated very much. Gastronomic references to Prosciutto di Parma are in the menu of the Colonna‘s wedding in 1589, in the precious text of Lascia, cook of Ranuccio Farnese in the second half of the seventeenth century. Prosciutto di Parma peeping through the rhymes of Tassoni and in the dietary advice of the Bolognese doctor Pisanelli. 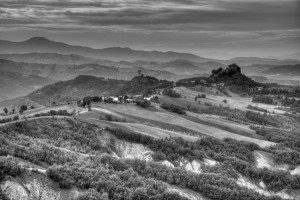 The development of this tradition was undoubtedly influenced by the presence in the Parma area of saline springs such as those of Salsomaggiore. The primitive stage, entirely handmade, has gradually developed until today towards a process of industrialization, significantly improving the hygienic conditions, has kept intact the traditional characteristics of the product. To protect the quality of this raw, the same producers in 1963 formed the “Consorzio del Prosciutto di Parma”, which, since then, monitors the processing and the choice of the raw material. Moreover, the European Community has granted in 1996 to the most famous Italian ham recognition Protected Designation of Origin (P.D.O.). The brand requires registration of production rules and respect them by anyone seeking to rely.

In the Parma area in the local dialect, the term “ham” is “par-Sut,” meaning “seems dry”, because of the aging of the meat, as well as rich of a percentage of salt, lose a lot of water and in this way the meat dries, “Suta pear”, “seems to dry.” Another school of thought has it that the name comes from the Latin Perex Suctum which means “dried up”, this theory is supported by the fact that over the previous dialect Parmesan and with it the word “par-Sut” is certainly younger Product “ham”. Moreover the latter theory was formally adopted by the Consorzio del Prosciutto di Parma.

The stages of rearing and fattening of animals and the treatment and the subsequent maturation are regulated and guaranteed by the consortium. Are used only thighs of great weight (fresh weigh between 12 and 13 kg). Salting is accompanied by a brief period of rest in cold storage, and followed by the shedding of a fat adrenal fine, lard, derived from pork. This ensures a slow drying, so that the manufacturer can mature the thigh for a long time (minimum 12 months), adding a little salt. When curing is complete, the product boned should come out on the market with a weight of 7 kg and 8 kg, while the product with bone should weigh between 9.5 kg and 10.5 kg. Prosciutto di Parma with a weight that is very different from those just mentioned, have a market value lower. 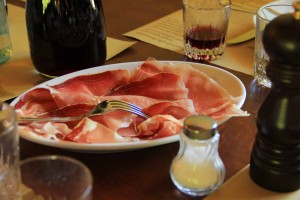 Tasty and healthy food, suitable for everyone thanks to the few fats, many minerals and vitamins. The only preservative allowed by the specification, in smaller quantities than other types of raw ham, is salt. Beyond the salt and lard there aren’t other additives.

The color ranges from pink to red, with white fat; the scent is delicate, the taste is sweet, fragrant, intense and refined.

It is eaten raw, cut more or less according to taste, combined with different flavors: with melon as a starter, with the roast pork, the famous Rose of Parma, and is the main ingredient of the classic tortellini. It goes well with many local wines.