Cold cut of cylindrical or oval shape, made with pure pork meat, finely chopped, mixed with lard, lightly flavored with spices, stuffed and baked. Presents only quality ingredients such as fragments of muscle of the pig (loins, shoulders, bacon), no additives.

Since July 1998, at European level, the name Mortadella Bologna has been recognized as a protected geographical indication (P.G.I.).

The origin of the name is still a source of debate, but it dates back to the Roman Empire. According to some derives from “mortarum”, a sausage flavored with myrtle berries, or from “murtatum” which means, precisely, meat fenili chopped in a mortar.

Mortadella is probably born in the first century and its production has developed in an area between Emilia-Romagna and Lazio; However, for a period of time, this meat went into oblivion, but reappeared in the late Middle Ages, which was produced exclusively in the city of Bologna.

Its origins are to be found in the territory of the ancient Etruscan Felsina and Bononia of the Gauls, who were living in environments rich in oak forests that provided the acorns, the main food of the pigs at the time, raised in the wild or domesticated.

In the Archaeological Museum of Bologna has preserved the first evidence of the presence of a producer of Mortadella: a pillar of Roman imperial depicts seven piglets grazed and a mortar with pestelle.

There is talk of Mortadella already in cookbooks of the fourteenth century, although it is likely that there were different kinds of Mortadella made with veal and donkey.

But only in 1644, we have documented the first written recipe of mortadella, thanks to the famous treatise of Vincenzo Tanara “L’economia del cittadino in villa.” Tanara indicates in his treatise amount and type of spices to use (salt, cinnamon, cloves, nutmeg, musk, pepper, sugar and wine Malvasia) and doses of the flesh. The doses provided by Tanara in its recipe are precise: a third of adipose tissues, pillow included, are cut into large cubes, two-thirds of lean meat from the shoulder and leg of pork that is converted into stuffing by “sharp pestature”. The all, after bagging, is then baked at a moderate temperature.

In 1661 to regulate the production was published a notice of Girolamo Farnese Cardinal of Bologna, which prevented the production of Mortadella meat other than pork, because that offense caused “in grave pregiudicio del Pubblico, e particolarmente della Dote che gode ab antiquo detta città di fabbricar Mortadelle d’isquisita perfettione”. This is considered the first measure taken to protect the world from a culinary specialty.

Nowadays, the characteristics of the Mortadella are established by the “Consorzio della Mortadella Bologna” and approved by the European Union.

For its preparation are used only fine cuts (meat and lard high quality), shredded appropriately in order to obtain a fine paste. The flavor is full and well balanced. Once cut, the surface is smooth and uniform bright pink color. Mortadella Bologna exudes a particular perfume and aromatic. The flavor is full, delicate, balanced by the presence of fat particles that give sweetness to the cold cut. Mortadella is an extremely versatile and used in different preparations. It can be consumed in combination with sliced bread, cut into cubes or as an aperitif.

The use of mortadella in the kitchen is not limited to traditional recipes, but is also subject to more fanciful interpretations.

Since 2007, at the end of September, in Zola Predosa (Bologna) is held “Mortadella Please – International Festival of Mortadella”. The festival is organized by two major manufacturers with headquarters in Bologna Zola Predosa.

In 2013 there was the first edition of “MortadellaBò”, an annual event that is usually held in late summer by the “Consorzio di tutela della Mortadella Bologna I.G.P.” in Piazza Maggiore in Bologna, involving all member companies producing, local institutio 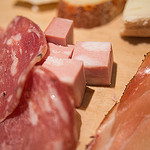 ns and administrative representatives of the city of Bologna.

Mortadella is a film directed by Mario Monicelli in 1971, with Gigi Proietti and Sophia Loren.