Parmigiano Reggiano Vacche Rosse, recognizable by the distinctive branding embossed on the plate form, is typical of the area of Reggio Emilia, since, in the production process is used exclusively cow’s milk of Reggiana breed.

The cow Reggiana represents the Italian strain of the red race native to Eastern Europe, bred in the province of Reggio Emilia.

The cattle arrived in Italy during the period of the barbarian invasions, probably the result of populations of southern Russia. Thanks to the hardiness and robustness of the breed, the breeding of the red race became common throughout the northern and central Italy, until the mid-twentieth century, when many farmers pass breeding of Friesian.

In the early eighties the breed cows red in the province of Reggio Emilia, had remained only a thousand. Thus was born the “Associazione Nazionale Allevatori di Bovine di Razza Reggiana” (ANABoRaRe) for the protection and guarantee of the red race and its products. 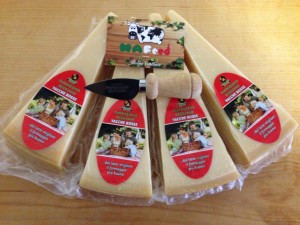 Cow’s milk has a red protein, casein and calcium higher than the milk of other dairy breeds, making it particularly suitable for processing of parmesan.

The different quality is already known in the pre-processing steps boiler, with a better coagulation and better fat bloom. In the boiler the formation of lumps homogeneous allows to work at a higher temperature. Even during the maturing cheese has a lower ability to proteolysis, allowing a longer curing, and then a product of greater digestibility.

The difference is also noticeable in the color, straw yellow, and structure, fine granules. The minimum seasoning of Vacche Rosse is 24/30 months, with the cheese becomes soft, smooth and pleasant. If it exceeds 36 months, the taste becomes more flavorful without exceeding the spicy. Distinguishing features and distinctive Vacche Rosse are the absence of lactose and high digestibility.